Research Triangle Park was founded in 1959 and is the largest research park in the United States and a premier global innovation center. It is located 10 miles from Carolina Preserve and positioned within a triangle formed by three Tier-1 research universities – North Carolina State University in Raleigh, Duke University in Durham, and the University of North Carolina at Chapel Hill. Its 7,000 acres house over 300 companies with more than 55,000 employees, and includes science and technology firms, government agencies, academic institutions, startups, and nonprofits. 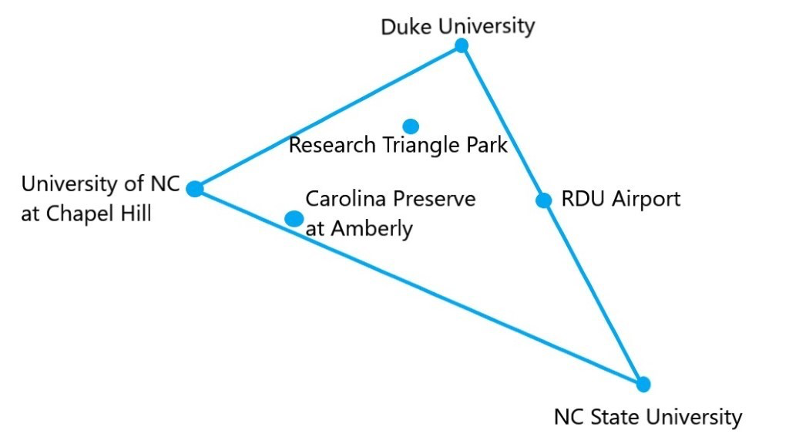 Located in the Piedmont region of the eastern United States, Carolina Preserve in Cary is near North Carolina’s Research Triangle and RDU International Airport.  It is bordered on the north and east by Raleigh, on the north and west by Research Triangle Park and Morrisville, on the south by Apex and Holly Springs, and on the west by the Jordan Lake area. The town is hilly, with much of the undeveloped land covered in dense woods. Several creeks and small lakes dot the area, most notably Lake Crabtree in the north. Carolina Preserve is in the northeast corner of Chatham County and borders the Lake Jordan Nature Preserve.

The Research Triangle ranks among the top in physicians per capita and is home to two of the nation’s top medical teaching and research hospitals, UNC Chapel Hill and Duke University. Three major medical centers operate in the Triangle offering residents an impressive range of healthcare services (WakeMed Health and Hospitals, UNC / REX Healthcare Systems and Duke University School of Medicine Hospitals).

Money Magazine named Cary, North Carolina, the hottest town in the East and one of six Hottest Towns in America. Cary was also recognized by Money Magazine as one of the Best Small Cities in America, ranking an impressive fifth on one of the magazine’s annual lists of Best Places to Live. As noted in several major publications, Cary’s accolades are numerous.